Sliding further into nostalgia (or should that be nausea) brings me to the next character I did which was Mitch Hunter. This name seems to be one of the stock names with Mutant Chronicles and old Mitch turns up in the rulebooks, the comics and the film (as played by Thomas Jane) but every single one seems to be different. I based mine on the comic book version and hes not quite as old looking as the RPG books make him out but hes looks like hes a tough git.
One weird design aspect of the books is the shoulder pads. They are big old chunkers that look weird when translated into a model. 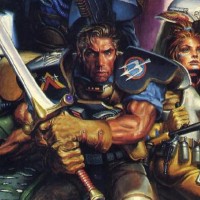 I did do them on mine but they got lost at some point. 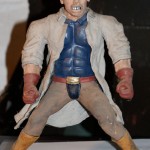 Along with him being clean. The dust on him is kind of nasty but it covers up the damages he’s had over the years. I’m not overly proud of the sculpt job now but at the time he was one of the best things I had ever done. 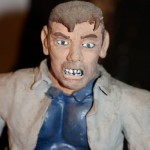 *groan* those teeth… the eyes!

Nevermind. I was young and I did get a kick out of working on these at the time.

I mentioned the film earlier and I wanted to say it was a missed opportunity. Like most films based on IP’s it missed the point. There are some incredible bits such as a steam powered flying thingy but the vast amount of the film has little to do with the setting in the books. I now have a strange urge to watch it again as I’ve not seen it in a while but I know I would be disappointed.

Back when I was handing in the final maquettes for my design module I also took the chance to knock up some posters based on the models. Sadly I can’t find the artwork anymore so I’ve had to resort to photographing the printouts which has resulted in loss of detail and weird colours.

Back in the late 90’s, as I was finishing off my art & design degree, I stumbled across some RPG books down at the Sunday boot sale at Portman road. It was the core rulebook from Mutant Chronicles along with the Capitol expansion rulebook. Being a collector of random rubbish, I bought them and took them away much to the annoyance of Mr Gibson who had seen them but didn’t buy them there and then as he later told me.
Anyway, what is Mutant Chronicles and why am I blogging about something over 10 years ago? If you are still awake and reading this then i’m shocked but the answer is that its a techno scifi/horror roleplay set in the future where humanity is fighting against a dark corruption that is filling our solar system. A dark and somewhat nasty evil known as Dark Legion which comes from another dimension (aren’t they always?) is slowly shutting down advanced technology leaving mankind struggling with a bunch of reanimated corpses banging on the door and the solar system being fought over by five main corporations which boil down to USA, UK, Germany, Japan and a 5th corp which somehow still has advanced technology that works. Add to that five factions in the Dark Legion and a ‘church’ like faction directly opposed to the Dark Legion, you have a fairly broad mix of styles to base roleplay games, table top battles, card games and assorted merch on.(More and somewhat more sensible descriptions are on the Wikipedia entry for Mutant Chronicles).

Around this time I also found out that John Carpenter was trying to get a film based on the IP off the ground an even found a few makeup tests based on this while scrounging the web at college (man I filled up those floppies with some gack back then) which fired me up for the idea of an epic war film set in the future with dead stuff and steampunk styled technology and remember that this was back in 96 or 97 long before a film with the name ‘Mutant Chronicles’ shuffled onto the big screen in 2008 (more on THAT in another post) As one of the courses had a ‘free module’ where you could spend your time writing your own brief and then trying to justify why it was a good idea, so I decided to create some maquettes based on this concept as if I was part of a design team for Mr C. At then end of the four week block I had produced three of these models based on characters from the books and also from Golgotha which was a Mutant Chronicles comic series with art by the mighty Simon Bisley (more on this rather important fact in a later post as well) so without much more farting around I give you my take on a Necromutant. 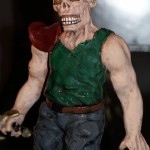 This cheeky chappy is the equivalent of a zombie in a horror film except with a sword… and armour… and not wanting to eat you. OK not like a zombie. More of a footslogger. I wanted to make one of the bad guys and give him some form of movement, slow shuffling but also to make him look like he wasn’t stupid. This guy is a grunt but just happens to be dead. 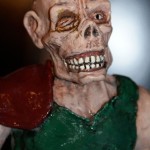 Yeah you mother loves you even if noone else does. The idea is that these guys are the dead from battles and brought back to fight for the Dark Legion and the Dark Apostles. 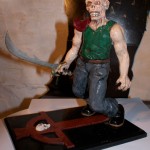 The main figure is sculpted in Super Sculpey with a wire armature. The base show the symbol for the Dark Legion and is MDF with about a dozen layers of black car paint sprayed over to give it a glossy finish. Paint on the figure is mainly Citadel acrylics.