Another update. Not even sure if anyone is reading these. When we last saw our intrept manservant he was waiting to see if he would be mass produced or just become a one of a kind. Well, after a tense finale, the Kickstarter made it and the cloning tanks started to output a host of Gavin.

Send in the clones

One piece which was cast in a two part block of silicone.

While the body was another slab.

This let me cast them up easily in two parts. Then, after a bit of cleaning/sanding/filling, they got glued together and then the loooooong job of painting was started.

Until there was a grand army of the republic.

After a varnish and basing I was able to get them herded together into a couple of boxes. Then over one weekend they got CAREFULLY driven from the dungeon in Suffolk to Bristol via Kent (long story) before being handed over to Rumpus Animation, ready for distribution to the people who backed the game at the correct level.

Here they are in Bristol, being commanded by the lord high Barry Monkey Esq.

Barry with his underlings

(Actually, I believe Barry is in charge of cleaning out their litter tray and feeding them while they live in the studio.)

Shortly after finishing them I went to a gig by Professor Elemental who is providing his vocal talents to the game and I did a custom Gavin for him based on his rather snazzy jacket.

At this point I’ve realised that I don’t have a painted Gavin of my own. At the time I was so sick of making them for everyone else that I didn’t make one for myself, this should be fixed one day but not just yet.

Heres a couple of shots of the finished pieces but theres more pictures, including lots of WIPs, in this gallery: https://goo.gl/photos/TL21w7ZD3vu1fpT49

I’m a bit behind on the progress reports on the latest Cthulhu statue castings so I though it was time to do a catchup of Cthulhu post.

Cthulhu 12, and I tried slate again. I don’t know what it is about slate, the powder is probably too porous or some such rubbish because even with careful mixing I get a sludge which holds the detail but goes black and blotchy when it’s pulled from the mould. I wasn’t overly happy with the final result so thought I would try something with it. The actual moulding was find so I dropped £35 and bought some Modern Masters Bronze paint, undercoat and patina. Big mistake. To be fair the effect sort of worked but the paint itself is too thick and sucks all the detail out of the casting. You have to apply two coats of undercoat to protect from the acid in the patina seeping through to the material underneath. Next you have to apply two coats of the bronze paint, the first needs time to dry but the second coat needs the patina acid applying as its wet. The bronze paint is quite thick but the acid is watery, cue much hilarity as the paint dribbled down the body washing much of the paint away and pooling in thick blobs in some places.

Now I will give it some credit, the patina works. Its just for me it should be all over and really darken down the bronze. Instead we get streaky bacon and really bright patches. The paint is designed for walls, mirrors, drainpipes and other things that hipsters like to be aged to look “vintage” (gag, such a stupid concept. Hipster should stick to “aged” or “retro”) but it’s not quite as effective on funny shaped statues of ancient cyclopean evil.

So I tried again. I gave it a coat of bronze then added the patina and it still turned out blotchy.

This time it darkened down the bronze in the paint much better (I did start to think I hadn’t put enough paint on the first time) but it still didn’t look even.

I gave up in disgust and dropped poor old Mr McThulhu into a bath of Dettol to strip the paint.

He then got a coating in some copper spray paint I had knocking around and then given a polish with metal fire-grate polish.

While all of that fun was going on I was working on Number 13. Unlucky? Not really. It came out well, polished up and apart from some annoyance when it didn’t want to come out of the mould, was no bother. Kind of boring when there isn’t a crisis isn’t it?

Then last week a delivery arrived. Bronze. I’ve been wary of bronze after the failure of the previous bronze casting but I now put that down to not being 100% ready. I also bought a new release agent to replace the dwindling supply of my old stuff and this new one was a spray wax called Macwax. If anyone happens to pass by and is looking for a release agent BUY THIS STUFF its the best one I’ve ever used. EVER! No really. The casting popped right out of the mould without a murmur of protest, theres no buildup so no loss of detail and isn’t too costly (£9 a can).

Look at that, not a blemish. Right from the mould the castings look dull but thats due to the resin mixed with the bronze, a quick buff of Cthulhu and…

After a final buff down and polish its come out perfectly. Coming in at 1.7kg there is a good solid weight to the thing which adds to the overall impression that this is made from a solid lump of metal. Yeah, postage would be a bit high but I can cut the amount of ATH added to the backfill resin if needed. I may also add a drop or two of black dye to the bronze when casting just to darken down the overall finish.

I’ve updated the Picasa gallery with some more pics of these boys so for a cornucopia of Cthulhus, please wander in that direction.

So whats next? Well I have a strong desire to try copper. While not as costly as bronze its still pretty steep but I can add a touch of copper to the bronze powder to try and give it a warmer feel but that probably wont be until next year sometime. In the meantime I have three (yes three) sculptures that I’m working on. One is well underway but I need to be outside to fibreglass it and sand it down so that may end up being a summer job, one is currently in the “I have an armature so get on with me ya lazy git” stage while the last is still in planning but may be started soon. All of these may end up as castings and the last two I’m hoping to go for multipart kits. Stay tuned.

Old ‘thulhu has had a busy few weeks. Besides the arrival of the casting chemicals (the invoice arrived today, I somehow racked up £125 on casting materials!) I’ve been spraying and sanding the old sod.

Firstly he was finished off. 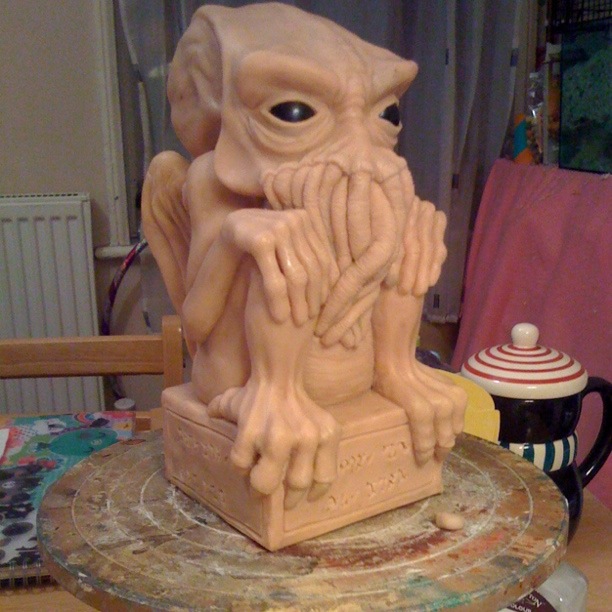 Then he was baked. 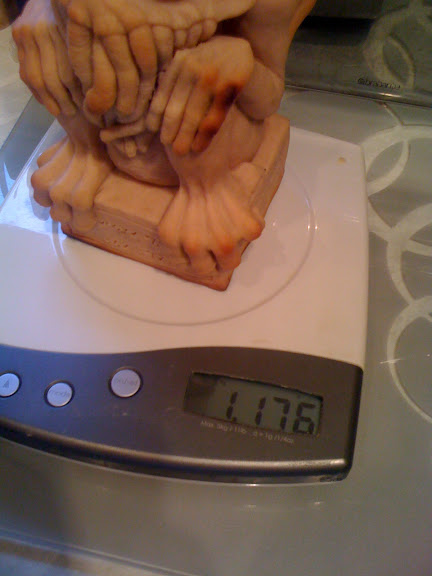 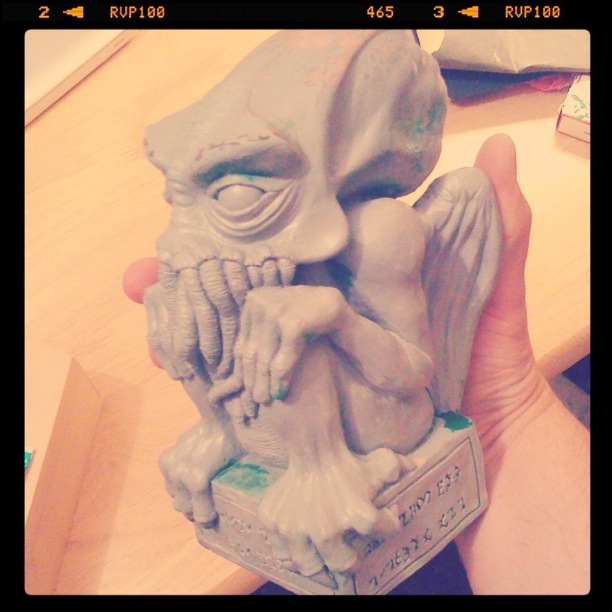 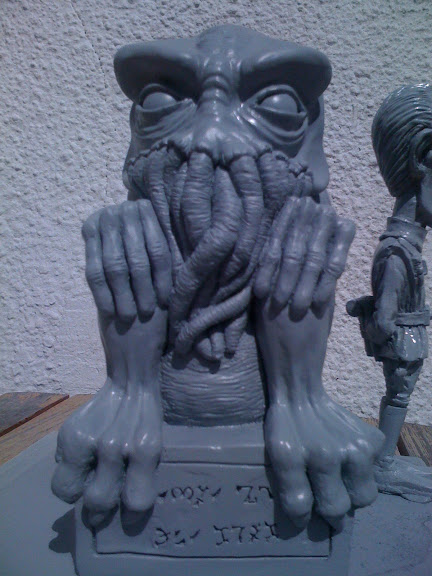 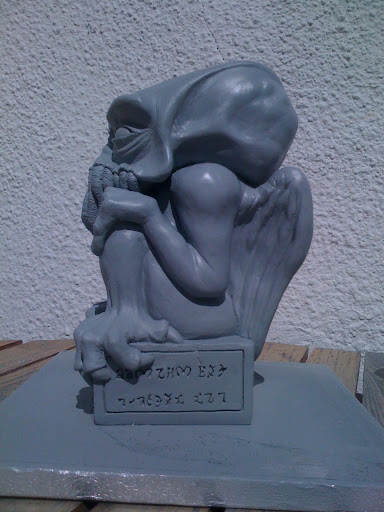 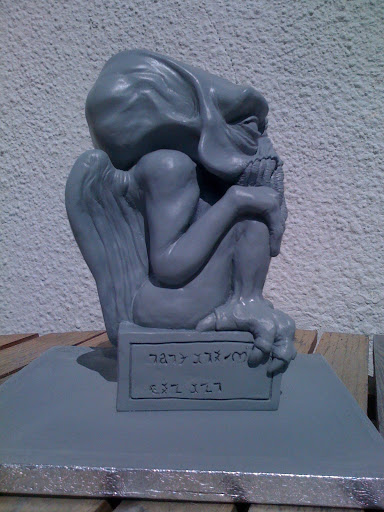 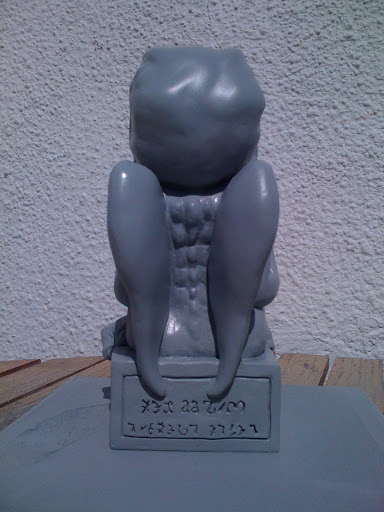 Then I started to layer him up in latex. 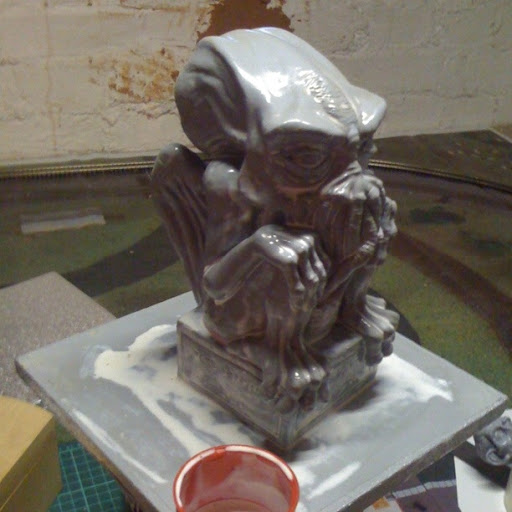 He had around 8 layers of latex followed by several layers of thickened latex. 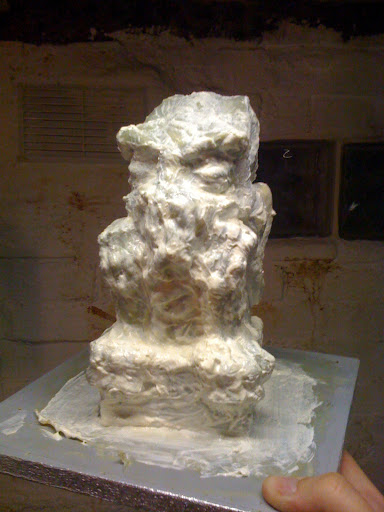 I then had a bugger with the mother mould. I had bought a load of plaster to do the mother mould in but, because of the wacky shape of the wings, it was too thin and broke. Arse biscuits. I tried again but it was obvious I would have trouble with it so gave up and pulled the rubber off. And lo, Cthulhu was released from ancient R’yleh… Well rubber’ley actually.

The detail came out perfectly on the mould. I couldn’t be happer with it. 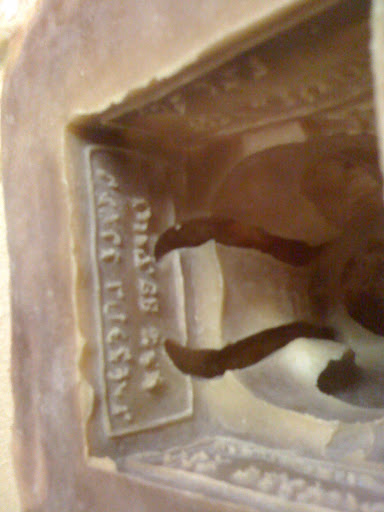 I did do a test mould with a small seashell that I moulded but the daughter took one look at it, shouted “AWESOME!” and ran off with it. I don’t know where she’s put it so I can’t take a photo but it cast really well. I’ve come up with a way of casting the body with only the latex jacket and no mother mould but its only a theory, until I actually do it I won’t know if it works, but on the other hand… this is me we are talking about. It will work.

My cultist level is rising. I’ll be buying robes next and chanting in the back garden under a gibbous moon to a bronze statue before anyone knows it.