While I have tried to be as active as little as possible on the net while on holiday, I wanted to get online to quickly say Happy New year to both of you who read this.

So happy new year to you etc… also to post up a couple of shots of this chap.

Originally from 1993, this is a (rather dusty) Sevans model of Kryten from Red Dwarf (as if you didn’t know) which has been sitting in a box for several years after I moved to Ipswich and left Manchester. He followed mum to Wales and has been sitting playing with his groinal attachment for some time, but was rescued the other day when I dug him out and dusted him off. This was an excellent kit which wasn’t given enough coverage and I was always proud of his paint job (I think I was about 15/16 at the time).

He’s also special for one other reason. He is signed by Robert Llewellyn when I went to hear him give a talk in Manchester one year shortly after I made the kit. I remember him bringing one of the masks from the series to the talk and me waving the silver marker pen at him and hoping he wouldn’t drop the kit (thankfully he didn’t) and i’m pleased to see the signature has stayed on the kit. What ever pen it was has done well. Other than that I have very little memory of what happened besides me sitting on the stairs in the Dillons bookshop where the talk was given.

I can’t remember the reason for the talk but it could have been to promote The man in the rubber mask or Thin he was and filthy haired a book I cannot think about without getting a sudden craving for Batternberg cake. Even now i suddenly want some.

As well as Kryten I’ve also uncovered a copy of ‘The man in the rubber mask’ signed the same day and with an added bonus of a train ticket dated the day of the signing.

The rail ticket is dated 18th May 1994 in case anyone cares.

For years I endured the joke. School, college, uni and even sometimes at work. Its one of those jokes which will forever carry on and people always think they are being clever when making it. When people find out my surname is Kirkby I often get asked ‘Do you get called Captain much?’. Its a joke as old as the hills and, while I would love to travel around in space, I can’t help think I don’t look much like William Shatner, and have never said ‘No, I’m from Iowa. I only work in outer space’

The relevance of tonight’s post to this tired dribbling is the HMS Dauntless, currently (as I type this) sitting on Great Yarmouth docks but due to leave some time Sunday morning.

Shes one of the Royal Navy’s newest destroyers and we had the privilege to have a guided tour around her today from one of her Lieutenants who is her navigation officer so quite a distinguished tour guide for a bunch of civvies. Due to a tie with work, we had the offer to visit her and I managed to drag the better half and our daughter along for the visit which involved getting up at a rather nasty hour and driving for nearly two hours to get from Ipswich to the dock in Yarmouth.

Shes huge. At over 150m long, you could see her from quite a long way in the distance with her rather unusual profile which is designed to give a profile similar to a fishing vessel and I would hate to see what kind of fish she pulls up from the sea.

After being met on the dock by one of her young officers (damn did I feel old next this guy) and being taken past a couple of gentlemen armed with large rifles and casual arms resting on the large rifles (i would have bet good money on them being fully loaded), we had a tour around the flightdeck/helicopter pad at the back, launchs, operations, officers mess (nasty looking chairs in there), and some of the techy areas.

The best part was of course going on the bridge and here we come back to our post title. I sat in the captains chair and grinned like a loon the whole time. OK so the little un got to do it as well along with her stuffin’ puffin Puffpuff. I couldn’t hog the fun all by myself. I resisted many urges to ask someone to take us to warp speed mainly because I would have looked a right prat infront of the crew members on the bridge but for the first time ever I can say I felt something. It was either the spirit of my uncle slapping me round the back of the head for disrespecting his old service or the fact I was sitting in the chair of a man who is in charge of a ship costing over £1billion GBP. Either way it was a jolt. I didn’t linger too long in the chair as I honestly felt it was wrong somehow. The lieutenant told us a story about a couple of chaps on the bridge who dared each other to sit in the chair only for the Captain to walk in while one was sitting in it. I can’t imagine his fate but the fact the Captain is the ultimate authority on his ship, who am I to sully his chair?

And finally, just to prove that the Navy has a sense of humour it had these posters scattered around the ship. I honestly thought it was a typo until I looked at the picture and it clicked that FOD stands for Foreign Object Damage. Har har har.


As both of you who read this know, today was Sunday. As part of Sunday we (as a family) chose to visit the Ipswich ‘music day’ event which happens around this time of year in Christchurch park.

Now I’m not normally one to write stuff about home life as I tend to think other people will find it a) boring and b) even more irrelevant than the other rubbish I post on here. This time however, I feel the need to talk about the mind bending experience I had today in the colourscape tent if only to try and understand it myself. 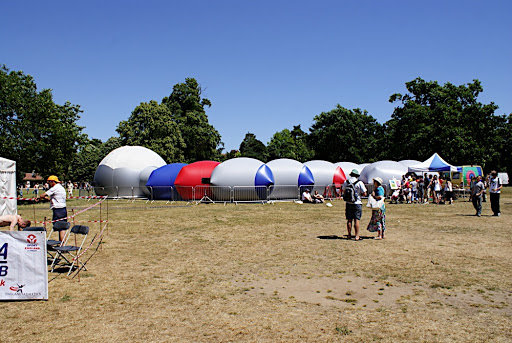 First of all, from the outside it looks like a whole bunch of interconnected tents and could easily be seen as a bit dull. Lined up in dull silver and on a hot day I have to say I wasn’t overly impressed. The little un showed some interested so we lined up (I think we may have muscled in on the queue as well by mistake. Sorry to the bunch of teenage kids behind us, I blame the fact you all stood about six feet away from the END of the line) and for a fiver (only the two of us went in) we got handed a coloured poncho (yellow for her, blue for me) and the dire warnings that it was hot in there and we should not run.

Stepping into the entrance we got hit by a wave of heat as we took off our sandals and stumbled into the heart of madness. At this point I should add I was still wearing my sunglasses and i’m kind of glad I was. Turning the corner we simply was assaulted by angry slabs of colour. I was expecting some vague notion of colour in there but not this. This was all out war on the rods and cones behind blue eyes. 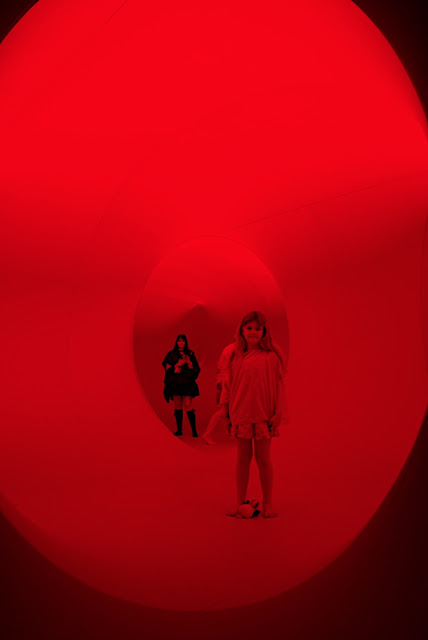 It is a huge 70’s sci-fi arthouse film given form, I kept expecting THX-1138 to walk past a couple of times. 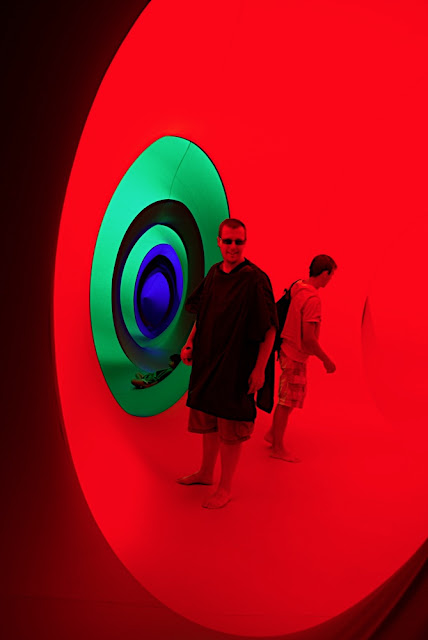 We wandered around and saw a group of three singers chanting, rooms of pure colour, corridors which seemed to stretch and bend away and several times my eyes felt like they wouldn’t focus or handle any more, mainly after being in the red areas then moving to calmer blues or green. The scale of the thing is part of the unsettling aspect and while it feels big, it also feels enclosed. Not one for the claustrophobic. The feeling which you get when you only have those colours to look at is impossible to express.

The one area of ‘normal’ colour was the room with the singers in as I think they could have gone mad in a room of solid colour. 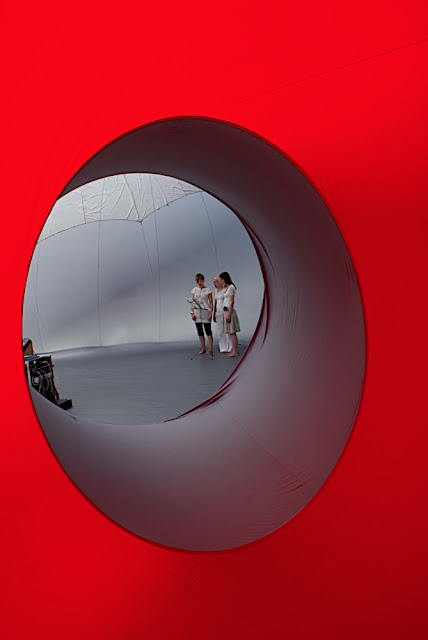 After half an hour of stumbling around, we left and rejoined the boring muted colours of the outside world to try and explain the sensation to the big un who didn’t join us inside, only to fail because its such a personal experience. This quote from the eyemusic website is the best way to express it.

Colourscape needs to be experienced directly — photographs only give an impression; descriptions are inadequate. Apart from how colour is seen it can also be felt. Colour is energy. Colourscape is about opening up your senses, stimulating creativity and extending your awareness of colour.

Whilst wandering through the interconnected chambers, you can experience the intensity and subtlety of colour. We use only translucent red, blue, green, yellow and opaque grey but you will see mixtures of colours that you may not be able to name.

When we got home we found our kitchen was full of queen ants so I had to rip out the cupboard under the sink to plug some holes and then we had a BBQ. Not quite as interesting as the colours but I feel I need to say something other than about the majestic bizarreness which was the Colourscape tent.

More photos from the inside are in my picassa album

Of all the things we have seen so far at Ip-Art, this is the one which is going to stick with me.

I should also add a quick happy 4th July to any Americans who happen to stumble by.