Thank buggery thats done. Its taken a couple of long nights and hurried restarts but i finally finished this months 3dworldmag contest to model an underwater ruin. My initial concept was for an underwater church with Deep Ones in praying to an idol of Cthulhu but sadly I had to scrap it as somewhat overly ambitious. Taking a small amount of Cthulhu inspiration and adding some more aquatic themes i ended up with the render above. Overall i’m really happy with it. Its gloomy but its clear enough to see the scene and feel a sinister mood. I don’t know why the pillars came out with a reddish tint but its adds some colour to the scene so its not overly dominating. I tried to make the viewers eye follow the line of the tentacles from the bright spot down to the eye peering through the broken window.

The whole scene is rendered in c4d, the tentacles and head are zbrush zspheres which are textured in zbrush and imported into c4d. The altar is a c4d model exported to zbrush then brought back to c4d. The pillars and walls/floor are 100% c4d and the textures on the walls are taken from photos I took while in Aldeburgh at the weekend and painted on in c4d/bodypaint.

Things I could have added. More rubble, broken glass, vegetation, some more furniture in the church like pews or the priests lecturn.

More renders are on my picasa album

I’ve not been able to do much in the way of 3d of late due to a load of 2d stuff being more interesting/important. That and cracking on with Fable 2 but i’ve managed to catch an hour on zbrush tonight and added some teeth to the frogbear. 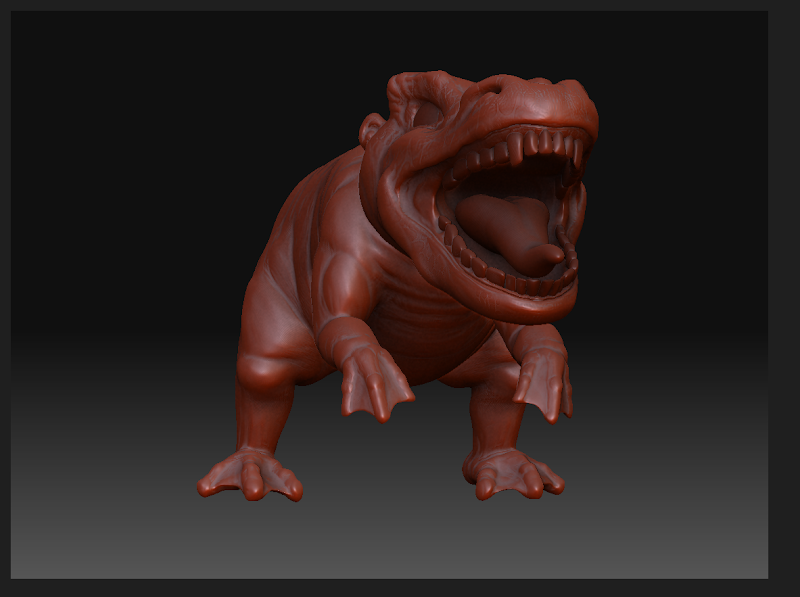 I will try and refine the body next then onto texturing.

I have a vision of a small mass of these hopping around the pond in Christchurch park. Only a foot or two high they could explain the lack of ducks lately. Look for feathers.

Didn’t get a chance to work on this yesterday and as i’m limited to time in the evening this is slow going but this is an update on the frogbear from subdivisionmodeling.com
I’m kicking myself for not including the teeth as part of the base model. I’ve just read part of a tutorial about how to mask of the mesh and sculpt the teeth but ya lives and lyrnes.