The following post is about making a small prop of the Golden Ward for the the Masks of Nyarlathotep Peru chapter so contains minor spoilers.

As part of the first session, the investigators stumbled onto a mysterious golden item in the basement storage area of a university they visited. I wanted to make a prop for them of this to have as props are a great part of any game and it adds to the flavour of the evening. I have bought the excellent HPLHS prop set for the Masks campaign but there isn’t a prop for the Ward, most likely because its supposed to be 2 feet long. A bit too big to ship cheaply.

The Golden Ward is a basic shape so thought I could create a model myself. I sat down a few weeks ago to try and sculpt it but didn’t get far and so it ended up on the back burner. With only a few days to go until the next session, I suddenly remembered it wasn’t done. So I fired up Cinema 4D and made the basic shape by chopping and shifting some points around until I had the form right. 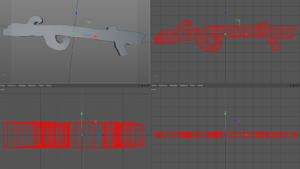 It looked right and with a little bit of roughing up, I had enough to export from C4D into Zbrush. 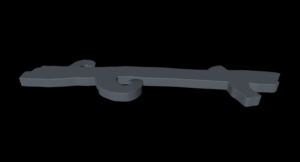 In zbrush I divided it a few times and then roughly carved symbols into the mesh. I don’t have any in progress shots but I did most of the work with the clay tubes brush and hpolish. I did dip into a few other brushes but I was flying so fast I didn’t keep track of what I was using. What I was aiming for was a roughly carved and damaged look, the Ward has been well traveled and isn’t in the greatest of shapes, so needed to look damaged.

I kept shifting between the red wax texture and the gold texture to see how it was looking in zbrush. Once I was happy with it, I hit it with decimation master, going from 11 million polys, down to 478,085, a pretty big drop. I could try to get it down further but didn’t want to ruin the mesh.

The golden ward, in gold.

I then exported the obj file to print on my iiip 3d printer. My first thought was to print it at 45 degrees across the bed to print it as big as possible. I ended up with a print time of about 6 hours this way plus I wasn’t sure if I had enough filament, so settled for a smaller size. 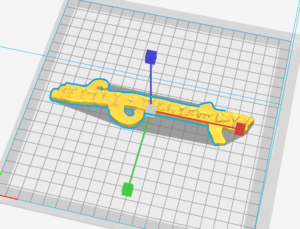 My printer doesn’t have the greatest of resolutions but it came out ok in a couple of hours. I sanded it to remove the print lines and gave it a coat of thinned out Liquid Green stuff to help with any parts I’d missed. I then painted it with some Games workshop paints and its done, ready for the game. 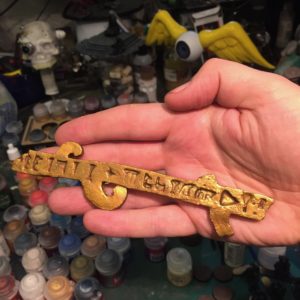 You can read all about the jolly hi-jinx of the team in my session write ups and the file for this is available on thingiverse.

The office I work in has just run a Game Jam so I took the risk of humilating myself by entering against a bunch of coders when I can hardly rub two bits of JS together. What made it more fun was I chose to do it in 2D and use C# as the language which I’ve never used before.

Kirkby – The egotistical game from the Gamejam

The theme of the Jam was Retro so I went for an 8-bit look and settled for an endless runner style game based on ME. Yes, I am an egotistical maniac with delusions of grandeur. The final game is available on this very website.

As its a running gag about my surname being spelled Kirby, not Kirkby, I went with the idea of creating a tiny me that looks like the Nintendo character. I created all of the graphics in game in Photoshop and then imported them into Unity. It was an interesting little project and I can think of a few things to tweak to improve it if I ever find the motivation.

Just incase you missed that link to play the game about me then its here.

I also helped out on the intro for another game which was created by one of the chaps in the office. I created two intro videos for it and the first one was a straight motion graphic mashup.

The second one used CG elements in Cinema 4D with a retro TV model from Pixel Lab.

To make the second video I shot some wobbly video of a table then motion tracked it in After Effects create a 3d camera. The camera was then imported into Cinema 4D where the 3d scene was created, then that was then imported back into After Effects using Cineware rather than rendering the footage out of C4D. This meant I was able to tweak the project on the fly rather than have to rerender everything every time I made a change.

Finally, just to prove that sometimes my work and home life overlaps a bit, I was asked to make one of the awards for the Jam. So, I present the “Peoples Choice Award Golden Joystick” made from an old Atari joystick, sprayed gold. 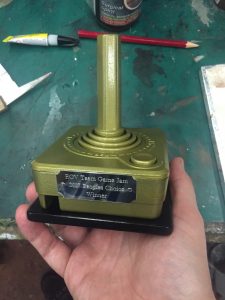 The final winner for both the main competition and People choice award was Clone Attack and well done to all who entered. I will try and grab some links to everyones game and add them below when I can.

Another month, another lack of bloggage, but I do have good reason as I’ve been working like a hardworking metaphor on several projects and I’ve finally finished Thor and started casting. The finished piece come is at around 6 inches high and I’ve made the first few out of bronze and one brass test piece. 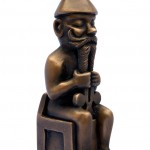 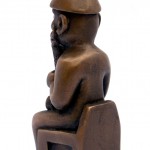 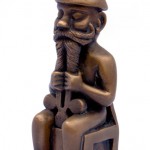 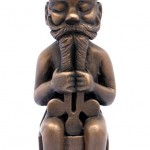 No photo of the brass Thor yet as I got a bit over excited and took it out of the mould while he was still a bit soft so he got a bit knocked. Some of the damage looks quite funky and it adds something to the feel of it being an old artifact. Pics will come soon.

I had a bit of a problem moment with casting as I’d ordered some General Purpose RTV Silicone Mould Making Rubber (say that in a hurry) from MB Fibreglass (a good place to get supplied from BTW) and I’ve never used it before. Hmmmm, possibly I should have tried using it first but I jumped in head first and mixed up a batch and set to and discovered that it’s runny stuff.

I built up a lego wall around the original Thor and poured in the rubber and at this point the flaw in my cunning plan appeared. I know better, I know I should have built up a better barrier at the bottom but I was being sloppy and rushing things. When I poured the rubber in it started to seep out of the bottom and dribble all over the place but I did managed to plug it up on the fly and carry on. Next time I will be better prepared but I’d just better make sure whatever I use to build up the base around the bottom with is sulphur free.

The final mould is really nice, very stretchy but rigid enough to hold up by itself without the need for a mother mould which helps a lot. I did have to put a slit down the back to help with the removal of castings but with plenty of elastic bands that stays shut on moulding.

Two finished and polished while the one in the middle-back was about to be polished. 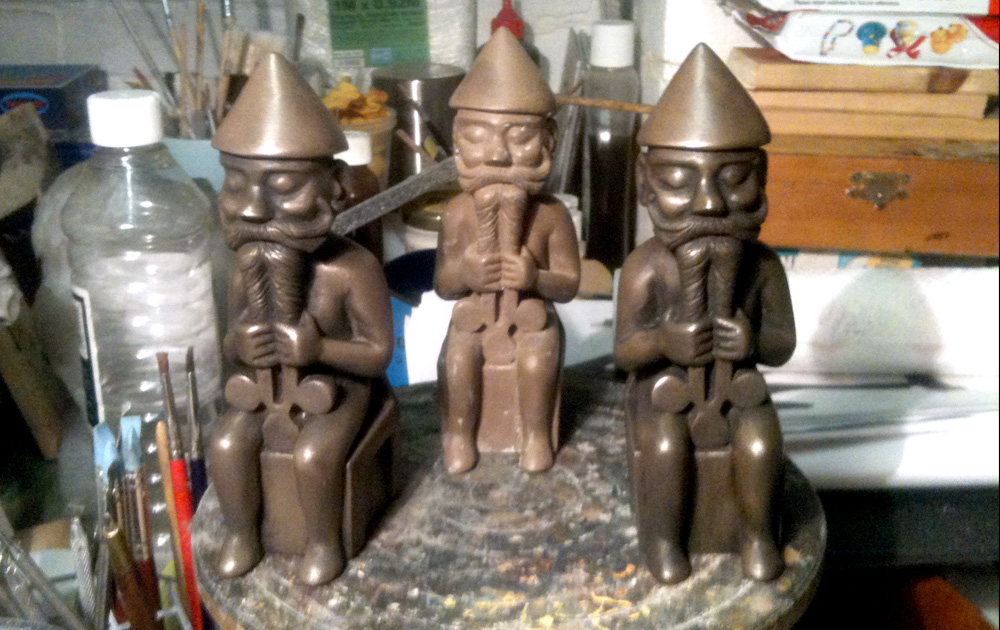 If you want to go and look at one in the flesh then they are currently on sale at Sacred Earth in Ipswich who commissioned the sculpture in the first place and through my Etsy store.