Thanks to some recent work on updating the blog I unearthed this unfinished post about the Inquisitor Rosette I made a few years ago. It was half written in 2018 and deserves to see the light of day.

The main parts had been laser cut for me and the cog parts went on to become part of my Mechanicus Purity Seal. The bits have been glued together and then the skull was donated from the normal purity seal casting by using enough resin to mould just the skull. It was a nice way to keep a similar design motif going. Oh who am I kidding, it was to cut down on the effort of making a new one.

It was pretty quick to prime and prep for casting.

I then had a go at casting in brass, bronze, copper, cast iron and two in a white finish. One to stain as if it was bone or ivory, the other to paint up in Inquisitorial colours. Already to kick ass for the lord Emperor.

And heres the Google Gallery: https://goo.gl/photos/gmJfjXaprHUFRA3N8

You can follow my dribbling on Facebook on my page Castings of Cthulhu and find out about stuff when I make it, not three years after I actually make them.

After I made my original purity seal, I’ve been meaning to make some new ones for a while. I even managed to start making a couple several years ago before forgetting about it. I finally got round to finishing and casting one based on the Adeptus Mechanicus logo.

It had been sitting unloved in a drawer for a while so with a little polishing up I managed to get round to casting it with some spare Dragon Skin silicone left over from remoulding Cthulhu. I used a trick I’d picked up a while ago for measuring the volume needed by pouring rice into the area to be moulded and then measuring that volume.

To test the mould, and also some different pigments I have, I mixed up some red resin and poured some test pieces.

I’m also trying out some new weathering process which look nice and is a little quicker than my current process. Using oil paint instead of black polish means I have longer to work with the weathering.

I’m pretty pleased with the end result. It looks nice and battered but the detail is still clear.

The finished Adeptus Mechanicus Purity Seal is now available, along with the standard Purity Seal, in my Etsy shop.

In an attempt to remove some of the rubbish from the blog, I’m consolidating some of my old little posts into one big post. This is an update of a set of blog posts from 2011 about sculpting a figure based on a concept design of a Warhammer 40k Skaven, so any references to dates are from back then.

I had started hunting through my books for some ideas and I thought I would go for something a bit bigger than I’d normally made. Whenever I made something large I always made an armature but couldn’t find any wire so legs got chucked as an idea. I went through plenty of books looking at goblins, monsters, beasties and assorted things until I flicked through my copy of “The Gothic and the Eldritch: The Collected Sketches of Jes Goodwin” and stumbled across this…

Reading the notes it seemed that Mr Goodwin had run over some ideas for the Skaven in 40k but they got dropped, which is a shame as the idea of scavenging, WWI style gas mask wearing rats carrying crude black powder weapons just hits all the right spots for me. So, here we go…

The base to hold the shape while sculpting starts life as a chunk of wood with two holes drilled into it, a couple of wooden sticked are rammed into the holes and then…

Two metal tubes are placed over the top so that when the final piece is baked it will slide off easily. Two sticks/tubes are used to stop it spinning around while sculpting. Next came blocking out the basic shape.

Getting the back into shape.

The filter part of the gasmask was made from 1 marker pen lid, several bits from an old tape deck, some small screws, the inner part of a set of headphones and a couple of bits of plastic.

It’s mounted on a bit of wood so it will slide in and out when needed as I won’t be able to bake this part with the rest of the body. Super glue doesn’t seem to like heat and I’m pretty sure the plastic will object to being put in the oven.

The gun barrel was made from a long bit of brass tube I had, and used some more to make the shell casings on the bandolier. 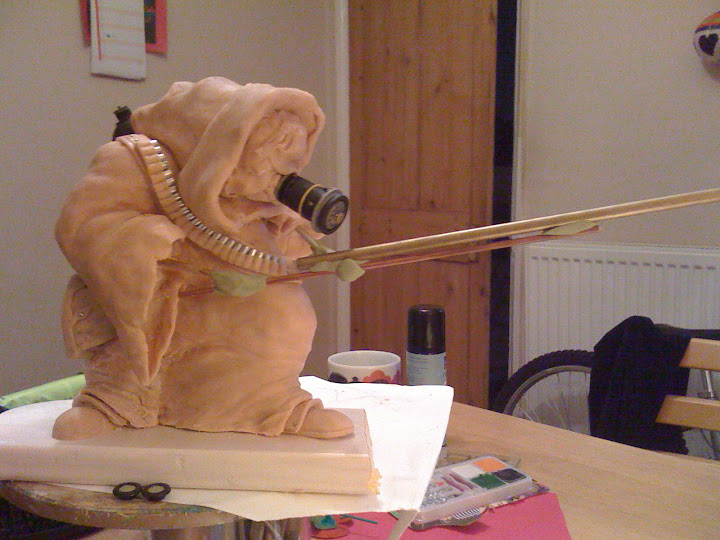 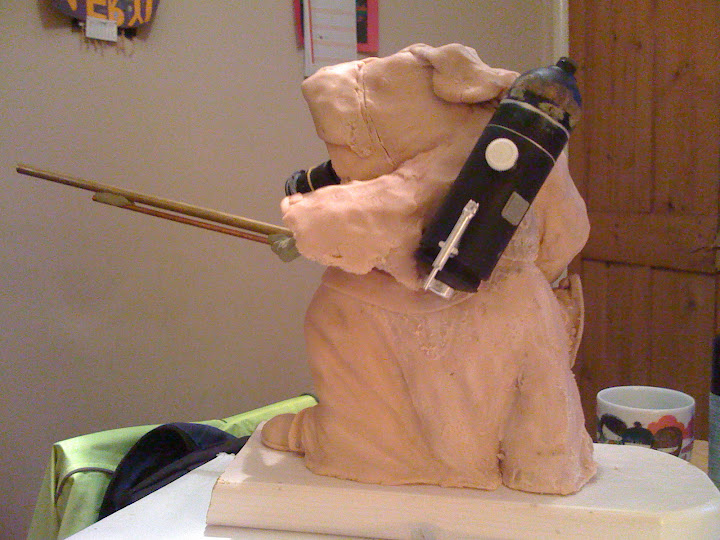 The rifle butt is now in place and there is a long tube of copper running from the back of the butt through the hand up to the barrel which in turn is attached via some milliput. The other arm is in place to add some support and to hold it in place. The back has the gas tank roughly in place with some details glued on. This tank comes off as its just held in place with a couple of screws which slide in and out of the sculpey body. Like the gas mask front, the tank has plastic bit so will not be going into the oven at the end but will be glued on after it has been baked.

Two things i’m not happy with. Firstly the barrel, not so much what it looks like (it will end up with loads of sculpey around it) but the fact when I swing the body around i sometimes nearly take my eye out. The other is the feet. There are two things I hate to paint, draw, sculpt, model… hands and feet. I don’t know what to do with them at the moment as the semi finished one (left foot) looks like a clowns shoe. All it needs is to be about an inch longer and it will be perfect for Mr Tumble. I needed to rethink them before I tackle the right one.

The final baking process happened on a Sunday night at around 10:30pm because I thought it would be a good idea to do before bed… yeah smart move there. I watched the gun burn slowly while the rest of him cooked but fortunately no serious damage happened. There are a few cracks in the robes but overall it happened pretty smoothly.

I gave him a once over and a quick spray to get the first coat on him. Next will be crack filling and replacing the one thing that got damaged which was the end of the gunsights. I now need to add some extra details such as the hammer on the rifle, the trigger guard and some extra bits of detail. After another coat to get the spots I’ve missed and cover the new details I’ll leave him for a while for the paint to fully cure. I also needed to come up with some sort of colour scheme.

The base was quite tricky as I had no idea what to do, other than I wanted something to hold him in place. What I finally ended up doing was blocking up the wooden base with some Das modeling clay and then adding detail to the base. I found an interesting tutorial on how to create scenic bases at xenite.wordpress.com which involves sand and sculpey.

The final piece is quite chunky, over 30cm long with that gun barrel poking out and 18cm high. He is one of the bigger pieces I’ve done but he is lacking in detail and textures. I’ve thought about tidying him up a few times but I’m going to leave him as he is. He’s a good reminder of how my skills have improved over the years.